A Lengthening Of Semiconductor Delivery To 17 Weeks In April

The time it takes for semiconductors to be placed and shipped, known as lead time, is an important guide to chip supply and demand. Foreign investors said a longer semiconductor delivery period of 17 weeks in April meant buyers were more eager to secure supplies.

According to the data, semiconductor delivery increased to 17 weeks in April, indicating that buyers are more willing to secure future supply and avoid shortages. Analysts use the indicators as a warning sign of stockpiling, which could lead to excessive stockpiling and a sharp drop in orders.

Analyst Chris Rolland recently reported, “Longer lead times often lead to ‘bad behavior’ from customers, including building inventory, building safety stocks, and reordering. These trends could lead to the early stages of over shipping in the semiconductor industry, where [shipments] are higher than customers actually need.”

In his April research note, Rolland said that semiconductor delivery times had been extended to 16 weeks, at the top of the ‘danger zone,’ and have now been extended further to 17 weeks, the fourth consecutive significant extension.

It is reported that the delivery period of some products such as power management chips in April has been four weeks longer than in March; Industrial microcontroller orders took three weeks longer to lead, the biggest jump since Roland began tracking data in 2017. 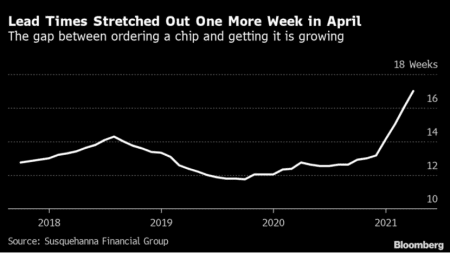 The average semiconductor lead time has now surpassed the previous peak of about 14 weeks in mid-2018. After a peak delivery period at that time, semiconductor industry sales fell in 2019.

The shortage was further complicated by a recent surge in coronavirus cases in China’s Taiwan province, which is a major hub for chip manufacturing, the report said.

STMicroelectronics: Automotive chip shortage expected to improve in the second half

Jean-Marc Chery, chief executive of STMicroelectronics, said the chip shortage would last until 2022, but the automotive chip shortage is expected to improve in the second half of this year when white goods and power tools manufacturers could be hit, European media reported.

Other media reports said the chip shortage is not the same as the chip crisis. Dan Hearsch, managing director of AlixPartners, said the immediate crisis of the chip shortage is now peaking and could end in the next few weeks or months. Although the crisis is over, it will not mean the end of the shortage of chips, supply will continue to be tight for a long time.