The technology of through hole and back drill in PCB production

The technology of through hole and back drill in PCB production
The friends who have done PCB design know that the design of PCB through hole is very particular, so what about PCB national control technology?Today I will share the technical knowledge of PCB through hole and back drill.
The through-hole design in high speed PCB
In high-speed PCB design, multi-layer PCB is often needed, and through hole is an important factor in multi-layer PCB design.
The through-hole in PCB is mainly composed of the hole, the welding plate area around the hole and the POWER layer isolation area.
1. Influence of through-hole in high-speed PCB
In high-speed PCB multilayer board, the signal transmission from one layer of interconnect to another layer of interconnect needs to be connected through a hole. When the frequency is less than 1GHz, the hole can play a good connection role, and its parasitic capacitance and inductance can be ignored.
When the frequency is higher than 1 GHz, the influence of the parasitic effect of the through-hole on the signal integrity cannot be ignored. At this time, the through-hole is shown as the breakpoint of impedance discontinuity in the transmission path, resulting in signal integrity problems such as reflection, delay and attenuation of the signal.
When the signal is transmitted to another layer through the hole, the reference layer of the signal line also serves as the return path of the signal through the hole, and the return current will flow between the reference layer through the capacitive coupling, causing problems such as ground bomb. 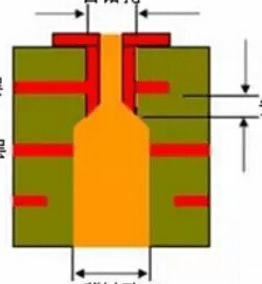 Back drilling is actually a special kind of hole deep drilling. In the production of multilayer boards, for example, in the production of 12-layer boards, we need to connect the first layer to the ninth layer. Usually, we drill through holes (one drill) and then sink the copper.In this way, the first floor is directly connected to the 12th floor. In fact, we only need the first floor to connect to the 9th floor. The 10th to the 12th floor is like a column because there are no lines to connect.
This column affects signal pathways and can cause signal integrity problems in communication signals.So drill the extra column (STUB in the industry) from the back (second drill).So called back drill, but generally not so clean, because the subsequent process will electrolyze away a bit of copper, and drill tip itself is also pointed.Therefore, PCB manufacturer will leave a little bit. The length of the STUB is called B value, which is generally in the range of 50-150um.
2. What are the advantages of back drilling?
1) Reduce noise interference;
2) Improve signal integrity;
3) Local plate thickness becomes smaller;
4) Reduce the use of buried blind holes and reduce the difficulty of PCB production.
3. What is the use of back drilling?
Back to drill the drill didn’t have any connection or the effect of hole section, avoid to cause the reflection of high-speed signal transmission, scattering, delay, etc., brings to the signal “distortion” research has shown that the main factors influencing the signal system signal integrity design, plate material, in addition to the factors such as transmission lines, connectors, chip packages, guide hole has a large effect on the signal integrity.
4. Working principle of back drilling production
When drilling with the drilling needle, the micro current generated when the drilling needle tip contacts the copper foil on the substrate surface is used to sense the height of the board surface. Then, the drilling is carried out according to the set drilling depth, and the drilling is stopped when the drilling depth is reached.
5. Back drill production process?
A. PCB shall be provided with a positioning hole on the PCB, and the positioning hole shall be used to position the PCB and drill a hole;
B. Electroplate the PCB after drilling a drill, and conduct dry film sealing treatment for the positioning hole before electroplating;
C. Make outer graphic on PCB after electroplating;
D. Conduct pattern electroplating on the PCB after the outer pattern is formed, and conduct dry film sealing treatment on the positioning hole before the pattern electroplating;
E. Use the positioning hole used by one drill to position the back drill, and use the drill tool to drill the electroplated hole that needs to be drilled back;
F. Wash the back hole after back drilling to remove the residual cuttings in the back hole.
6. What are the technical features of the backbore plate?
1) Most backs are hard
2) The number of floors is generally 8 to 50
3) Plate thickness: more than 2.5mm
4) The thick diameter is relatively large
5) Larger plate size
6) Minimum aperture of general first drill & GT;= 0.3 mm
7) There are fewer outer lines, and most of them are designed with square array of compression holes
8) The back hole is usually 0.2mm larger than the hole to be drilled out
9) Back drill depth tolerance: +/ -0.05mm
10) If the back drill requires drilling to the M layer, the media thickness from the M layer to the M-1 layer (the next layer of the M layer) shall be at least 0.17mm
7. What are the main applications of backbore plates?
The backplane is mainly used in communication equipment, large server, medical electronics, military, aerospace and other fields.As military and aerospace industries are sensitive industries, domestic backboards are usually provided by military and aerospace systems research institutes, r&d centers or PCB manufacturers with strong military and aerospace background.In China, the demand for backplane is mainly from the communication industry, which is developing gradually in the field of communication equipment manufacturing.