In the manufacturing process of Rigid PCB, Flex PCB and Rigid-Flex PCB, there are three surface treatments with metal gold as the material: Gold plating, ENIG and ENEPIG

The gold-plating process, which uses real gold, even on a thin coating, accounts for nearly 10 percent of the board’s cost. Printed circuit board gold plating is used Au as a plating layer, one is to facilitate welding, the other is to prevent corrosion; For example, the Goldfinger of a memory stick, which has been used for years, still shines as brightly as ever.

Electroless Nickel Immersion Gold (ENIG), also known as nickel gold. The gold is chemically coated with a thick, electrically good nickel-gold alloy on the copper surface, which protects the PCB for a long time. The inner layer of nickel is generally 120~240 in (about 3~6 m), and the outer layer of gold is generally 2~4 inch (0.05~0.1 m).

ENIG PCB to achieve good electrical conductivity during long-term use, and it also has the environmental tolerance that other surface treatment processes do not have.

Compared with the ENIG, ENEPIG has an additional layer of palladium between nickel and gold. In the deposition reaction of replacement gold, the electroless palladium plating layer will protect the nickel layer and prevent it from being excessively corroded by cross replacement gold. Palladium should be well prepared for gold leaching while preventing corrosion caused by replacement reaction.

Advantages: it has a wide range of applications, and can effectively prevent the connection reliability problems caused by black disk defects.

Disadvantages: Although nickel palladium has many advantages, but palladium is expensive, is a shortage of resources. At the same time as gold, its process control requirements are strict.

ENIG (Electroless Nickel Immersion Gold) is widely used in mobile phone circuit boards, and some BGA boards use ENIG as well. Compared with nickel plating gold, this kind of chemical nickel gold leaching in the process of circuit board factory don’t need electricity on the circuit board, also do not need to stay in each plating on the pad to pull a wire connected to nickel and gold plating, so its process is relatively simple, production is a multiple of above, so the production cost is relatively cheaper. However, ENIG surface treatment also has its shortcomings and problems, such as low welding strength and easy generation of Black Pad, which is also often criticized.
The production process of ENIG PCB is roughly as follows:

Microetching: Sodium persulfate/sulfuric acid is used to remove the oxide layer of the copper surface and reduce the depth of furrow caused by brushing and grinding during pretreatment. Too deep a brush mark is often an accomplice to immersion attacks on nickel layers.

Chemical nickel: Ni/P, whose main function is to inhibit the migration and diffusion between copper and gold, and as an element that reacts with tin to form IMC after subsequent welding.

Immersion gold: The main purpose of the gold in the protection layer and prevent nickel oxide, gold in the process of solder will not participate in chemical reactions, instead of too much gold incompatible with the strength of the solder, so as long as enough gold coated nickel layer can make it difficult to oxidation, if is to be a COB (Chip On Board) lineup is another matter, because the thickness of the gold layer to have enough.

Advantages of surface treatment of CIRCUIT board ENIG:

ENIG printed circuit board can be used as the base metal of COB wire. Reflow can be repeated for many times, and generally, it is required to withstand at least 3 times of high temperature welding, and the welding quality can be maintained consistent.

ENIGPCB has excellent electrical conductivity. Can be used as a button to guide the goldfinger line, and high reliability. 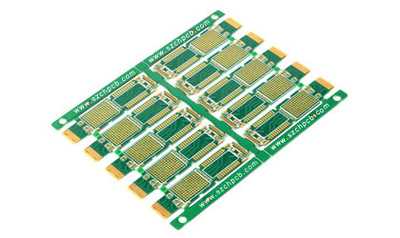 Metal Gold activity is low, and not easy to react with the ingredients in the atmosphere, so it can play a certain anti-oxidation, anti-rust ability. Therefore, the retention period of ENIG can generally easily exceed six months. Sometimes, even if ENIG is kept in the warehouse for more than a year, as long as it is in good condition and there is no rust problem, the circuit board can still be used for welding production after it is confirmed to be ok after baking, dehumidifying and welding test. Gold is also hard to oxidize when exposed to the air, so large areas can be designed to dissipate heat. It can be used as the contact surface of blade plate. The gilding for this application must be a little thicker. Hard gold plating is generally recommended.

The surface of ENIG is flat, the smoothness of printing solder paste is good, easy to weld. Very suitable for thin foot parts and small parts, such as BGA, Flip-Chip parts.

Disadvantages of ENIG surface treatment of circuit board:

Generally speaking, Ni3Sn4 welding spot strength is not as good as Cu6Sn5, some special requirements for welding strength parts may not be able to withstand too much external force impact force and have the risk of falling.

Because of the rising price of gold, the cost is relatively higher than the OSP surface treatment.

There is a risk of Black pad or Black nickel, which will cause the solder joint strength to drop rapidly. Black pad for complex NixOy chemical formula, the fundamental reason for the nickel surface on gold leaching replacement reaction, the nickel surface by excessive oxidation reaction (metal nickel free as nickel ions can be generalized as oxidation), to very large volume of gold atoms (144 PM) gold atomic radius sedimentary formation of rough and irregular porous grain arrangement, that is to say the “gold” failed to completely cover the bottom layer of nickel layer, have the opportunity to continue to contact with the air of nickel layer, finally under the gold layer gradually formed nickel rust, eventually to welding. There is an ENEPIG surface finished process that effectively solves the black pad problem, but because it is still relatively expensive, it is currently only available to high order plate, CSP, or BGA manufacturers.
Traditional ENIG surface treatment decided Nickel corrosion was inevitable due to its displacement reaction mechanism. When Nickel corrosion reached a certain degree, there would be reliability hidden trouble for solder spots. Brittle fracture and black fracture occurred at IMC.

ENEPIG (Electroless Nickel Electroless Palladium Immersion Gold) can be realized by adding a Palladium trough to the traditional ENIG production line, and the process time is not significantly improved compared with ENIG. Palladium in the REDOX system will not attack the nickel layer during the deposition process and can be used as a barrier layer in the gold deposition process to avoid nickel corrosion. For welding, palladium itself can be used as an antioxidant layer. Compared with ENIG, the thickness of the gold layer of ENEPIG can be reduced to 0.015um. Since the gold price is much higher than that of palladium, the comprehensive cost of ENEPIG is not too high compared with ENIG.

ENEPIG technology is applied to the surface treatment of encapsulated substrates. In the process of nickel-based palladium leaching, precise deposition thickness and uniformity of the gold layer can be obtained by controlling electroless palladium plating on the nickel layer and controlling the leaching of gold, so as to achieve a good contact surface. The problem of gold seeping in the leaching process was optimized and controlled to meet the requirement of small spacing in the welding area. By testing and comparing the ability, weldability and anti-aging ability of Wire Bonding in ENEPIG surface treatment welding area and nickel electroplating metal surface treatment welding area, it is verified that the control technology of ENEPIG has the reliability of Wire Bonding and tin welding that is superior to nickel electroplating gold. The deposition thickness of nickel is about 3~6 m, that of palladium is about 0.1~0.2 m, and that of gold is about 0.03~0.1 m. ENEPIG control technology provides excellent reliability in surface treatment and meets all requirements of lead-free assembly processes, making it ideal for surface treatment manufacturing of packaged substrates.

ENEPIG technical requirements:
ENEPIG completely has no black disk failure risk and can replace ENIG to avoid black disk failure risk. There is no ENIG+OSP design constraint condition, and the comparable cost is 8-10% lower. Therefore, from the comprehensive consideration of design and processing, ENEPIG can replace ENIG+OSP to achieve cost reduction.

The limitations of ENIG+OSP process:
Due to the potential failure risk of ENIG in black disk, the original single ENIG method is changed to ENIG+OSP for the surface treatment of mobile phone single board. ENIG part is used for mobile phone Key /Key pad and shielded area.

XPCB has been the manufacturer of ENEPIG PCBS for over 10 years.

Quick-turn PCB prototyping is our specialty.  Demanding project is our key capability.

What Are the Disadvantages of PCB Surface Treatment Process?

Summary of Ten Major Defects in PCB Board Design Process

Principles and Advantages of AOI Detection in SMT